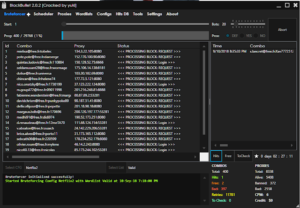 Here is the BlackBullet Latest Version.

What’s new in this version.

NOTE: In patch 2.1.0 the config format was changed, your Configs list will be purged and you need to convert your old .ini configs
into .bbc using the converter in Configs –&gt; Conversion. You can do it in bulk too. For encrypted configs, ask your seller for a new one.

You won’t able to load ini config into this version of blackbullet because they developer changed the format to .bbc

However we included a converter that can convert .ini configs into .bbc

You won’t able to load any configs made from legit version of blackbullet because they are already encrypted and the decryption keys are stored on their server. You can however share Blackbullet configs which are made from cracked version with others who has the cracked version aswell!

HOW TO CREATE CONSOLE CHECKER IN C# (SOURCE CODE)